Talking about football is inseparable from 11 vs 11. A team uses the same uniform to be able to distinguish between friend and foe. The function of the uniform was mainly for this.

In 1891, officially Football Association (FA) apply rules if English clubs must wear uniforms. When the first football uniforms were implemented, the uniform material was made of cotton which was thick, heavy and long sleeved. Then, at that point the garment was collared, until the collar had a fastener.

Each team’s uniform differences are not only in color, but also develop by adding motifs such as vertical and horizontal stripes, plaids, polka dots, diagonal lines and other motifs.

In England itself, where football uniforms were first set, there are teams with distinctive motifs such as Stoke City and Sunderland who have retained their red and white vertical stripes from the past to the present.

Wolverhampton was essentially the same as Sunderland, with the red and white vertical stripes changed to a black and orange half diagonal motif. The reason for changing the motif was that in the FA regulations of 1891, not every team could wear the same colors and motif.

What England did in setting uniforms for football teams, forced teams in Europe to adopt these rules. In Italy, Juventus became one of the teams to choose the vertical line motif and still use this motif to this day.

Uniform for everyday and style

Apart from the basic function of characterizing a team on the field and the presence of players on the field, the football team uniform evolved as a function of aesthetics and style.

A fan wants to get the uniform worn by his idol. Thus, a football club will sell uniforms with the original version worn by the player or the version for fans at a more affordable price.

Selling players’ uniforms has become a separate business. Clubs will rack their brains to ensure that each year’s design is enjoyed by the public, not just club fans or football fans. through what? Through an aesthetic that invites non-fans to be interested in purchasing uniforms.

Because the market that is reached is not the same as the players practicing on the field and the uniforms purchased are not only used for sports, the buyers want to wear these uniforms at least for daily use. Or, you can rock it with confidence while strolling through a city mall.

The look of football club uniforms will change every year. Whether a uniform looks good or not is a subjective matter. The objectives discussed in the previous chapter are now increasing. For example, Hull City uses a tiger motif, as this is the identity of City’s tiger logo. Or, the latest has been implemented by Napoli who wore a distinctive army stripe motif on their away uniform in the 2013/14 season and Juventus’ third shirt in the 2020/21 season.

Nigeria and its attractive jersey at the 2018 World Cup

On February 7 2018, before the start of the World Cup, the social media world, especially football fans, was shocked to see a uniform worn by the Nigerian national team. set Correct image of a model with uniform making style Super Eagle Different from other competitors.

What Nigeria and Nike are doing is tapping into a wider market, not just football fans. Coordinate the game with them Street wear fashion.

By using plain designs or few patterns they broke the trend that other countries used at the time. The Nigerian uniform has a white basic design with a subtle wave motif resembling a green eagle feather and black inside. The uniform design has become a topic of discussion in several magazines fashionOne of which is GQ.

In fact, before the sale of Nigerian uniforms started, orders had already crossed the thirty million order mark and had the potential to generate $225 million.

In one definition, street wear Fashionable is defined as the art of dressing but still being relaxed, comfortable and consistent with self-expression. then, street wear There is a wider scope, such as how street culture influences development street wear This is.

Initially, movement street wear It was pioneered by James Zebbia, owner of the Supreme brand, and Sean Stussy, owner of the Stussy brand. With a designer named Dapper Dan, street wear In the 1980s it became more valuable to create a style through the world of hip-hop.

street wear With very thick hip-hop. Because hip-hop is a culture that was born in the streets. And hip-hop was born in the 1970s, pioneered by Caribbean immigrants, African-American and Latin American youth. Consists of four elements including hip-hop Rap, DJ, Graffiti and Breakdance.

Likewise, how Nigeria and Nike envisioned the Nigerian National Team photo session campaign for the 2018 World Cup. The photo session didn’t look like an introduction to a player or a football athlete, but it did look like an introduction to a football player. Fashion brand. With sneakers, gold watches, chain necklaces, rings, skinny pants, of course the Nigerian uniform tops and jackets, with fashion-style gestures. fashion.

Different from other competitors. For example, England, who also shared Nike clothing, showed Marcus Rashford who was at the club changing room, Carrying shoes and wearing clothes Complete kit.

The aesthetics and luxury of the Venice, 2022/23 uniform

A city with a beautiful aesthetic that invites local and foreign tourists to visit the city of Venice. Not only the aesthetics of the city, the 2022/23 season Venezia Football Club has a uniform that looks aesthetically luxurious. However, competing in Serie B, Venezia won praise when promoting their new uniforms for the 2022/23 season.

In the process of creating the uniform design, Kappa Venezia collaborated with a German visual creative studio, Bureau Borsche, as the costume team. Prior to managing the Venezia uniform design, the bureau managed the visual design of super power brands such as Balenciaga, Nike, Supreme, On-Running, Audi, BMW Group, Apple.

In addition to contributing to the creation of the uniforms, the Bureau also participated in the change of the logo of the Borsche Venezia. Logos previously featured Lion of St. Mark Venezia changed to become more elegant, merging into the letter V with the shadow of a lion as characteristic of Venice, with the lines of the outer circle of the writing Venezia.

If we break away from the basic uniform, the Venezia puts forward a concise yet elegant look. Black becomes the dominant color without omitting the characteristic orange-green lines on the edges of the collar and on the sleeves. Then the gold V logo is placed on the left chest, the Kappa robe logo is gold on the right chest, then the middle front chest has the inscription “Cita di Venice” with font Gold serif type.

From the minimalist yet elegant uniform design, it is definitely in line with what Bureau Borche brings. There is a studio trademark minimalistic 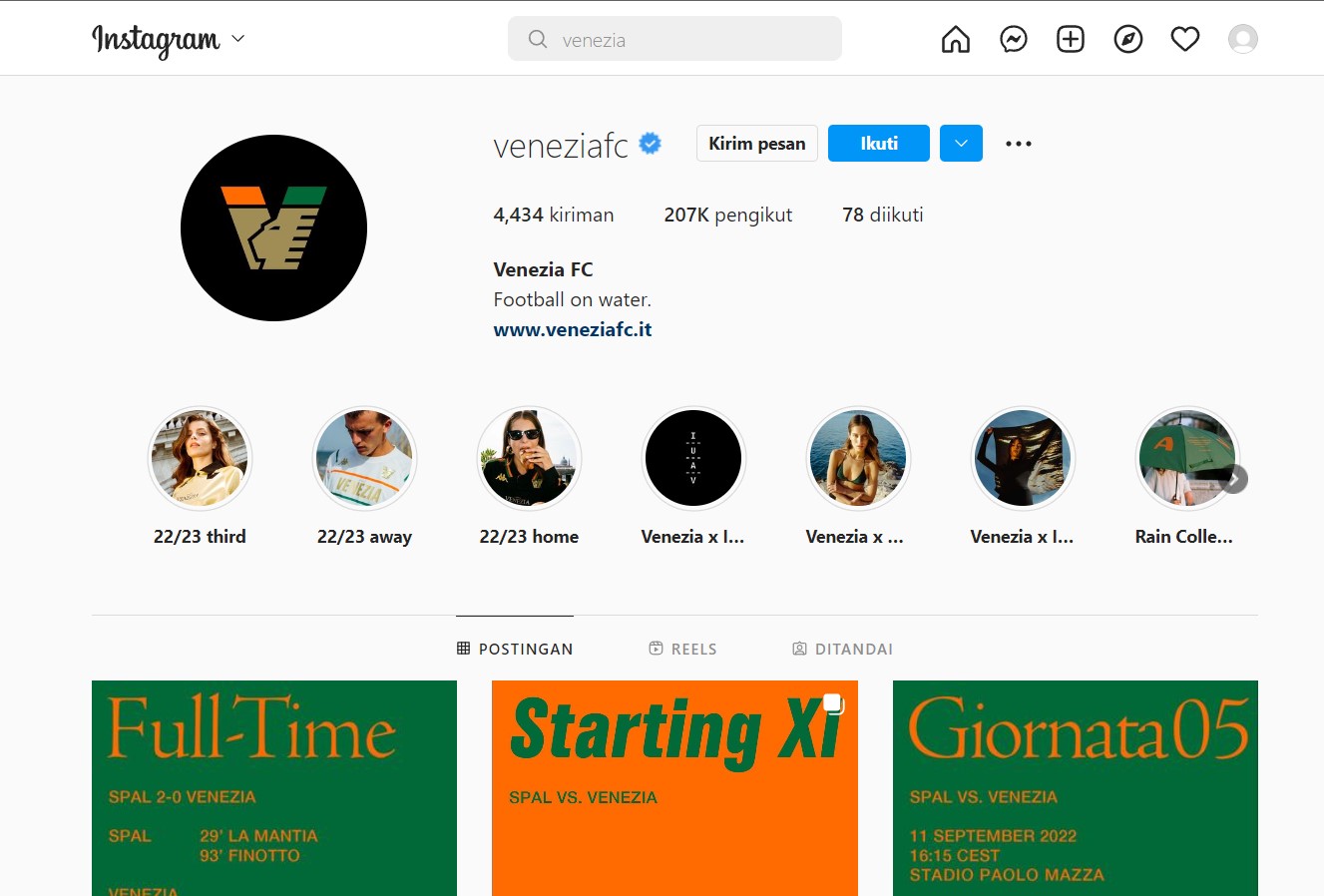 Also, there is a magazine look on the Venezia website display from social media fashion. The photo of the model appearing in the role of uniform was also directly displayed by a model. Venice signed a contract with a modeling agency from Greece, and added a female model named Theopisti Porliotopoulou. 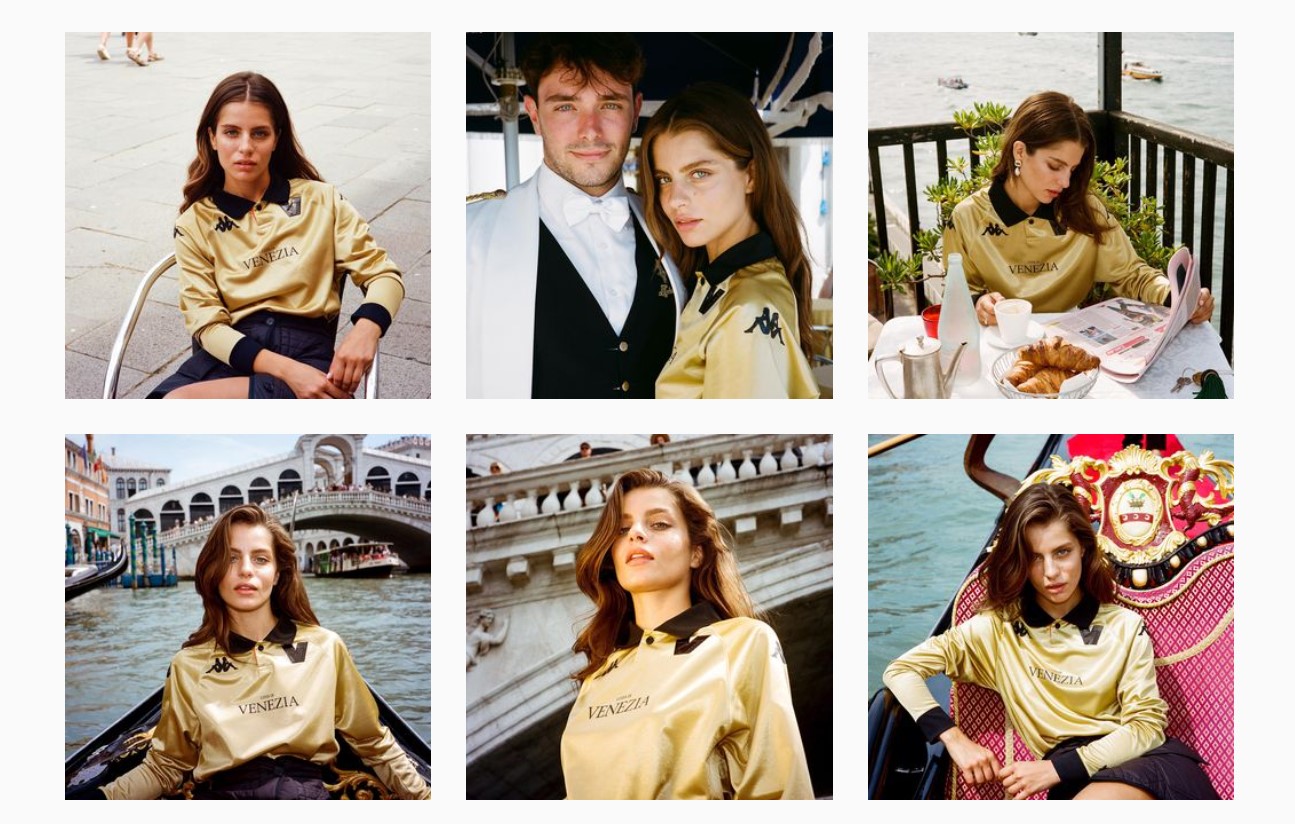 A uniformed model poses on a boat, gondola and various corners of the city of Venice. In addition to introducing the team’s uniform of small town pride, Venezia FC more clearly introduces what the city’s exotic appeal looks like.

What Venice and Nigeria have done in launching their uniforms illustrates, more broadly, how a club promotes and does business in selling uniforms.